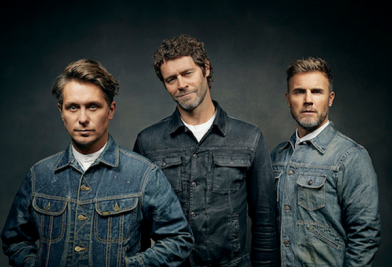 War Child and O2 have announced that Take That, the UK’s most successful live act ever, will headline the annual War Child BRIT Awards Show together with O2 as part of BRITs Week.

The announcement follows an epic end to 2014 where the band achieved a No.1 single, No.1 album and huge selling UK tour.

Take That join an illustrious list of acts who have previously played War Child’s annual show, including Coldplay, Muse, Ed Sheeran, Blur, The Killers, Calvin Harris and Mark Ronson. The show gives fans an opportunity to see the record breaking band in the refreshingly intimate surrounding’s of London’s O2 Shepherd’s Bush Empire and will raise funds for children effected by an unprecedented year of violence in war zones including Iraq, Syria, Democratic Republic of Congo, Afghanistan, Uganda and Central African Republic.

Ben Knowles, Director of Music at War Child, says: “The War Child and O2 BRIT Awards Show has seen some unforgettable performances over the last six years, including Gary Barlow joining Coldplay, The Killers and Bono for a legendary encore in 2009. War Child are delighted to welcome back Gary together with Mark and Howard to London’s O2 Shepherd’s Bush Empire and to announce Take That as our headliners for 2015. It’s going to be an incredible night for 2,000 lucky fans and an important one for the thousands of children it will help War Child save from the horrors of war.”

War Child has a long history of working with the biggest and best names in music to give a better future to children whose lives are being torn apart by war. Supporters include Paul McCartney, David Bowie, U2, Paul Weller, Lily Allen and Elbow. In 2013 War Child were awarded the Special Recognition BRIT Award.

Nina Bibby, Marketing and Consumer Director at O2 said; “It is an honour to continue our long standing relationship with War Child in support of the incredible work they do. Together we have put on many unique and unforgettable shows, helping to raise valuable funds for War Child whilst also bringing O2 customers even closer to the artists and music they love. With Take That confirmed as the headline performers for the War Child and O2 BRIT Awards Show, we can be sure that it will once again be an incredible night to be part of which is why we’re proud to be giving customers Priority Tickets for this special show.”

Tickets are priced at £75 and O2 customers can get Priority Tickets 48 hours before general release from 9am Wednesday 21st January by downloading Priority in the app store. Tickets go on sale to the general public from 9am on Friday 23rd January from http://www.ticketweb.co.uk/warchildtt. Each year O2 gives customers access to thousands of gigs through Priority for The O2, O2 Academy venues and many other venues nationwide.