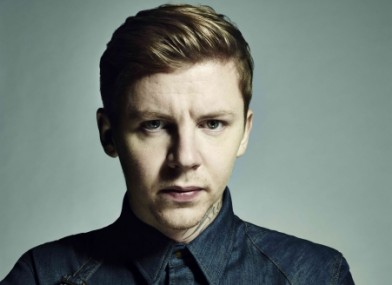 Professor Green returns with Little Secrets, the second single to be taken from his third studio album, Growing Up In Public. Little Secrets follows hot on the heels of the certified silver single Lullaby (feat. Tori Kelly), Green’s biggest hit since Read All About It in 2011. The recently released Lullaby debuted in the top 5 of the singles chart, sold over 200,000 copies, and has already been streamed over 2.5 million times on Spotify.

An acoustic-guitar driven soulful anthem in the making, Little Secrets is produced by Kid Harpoon (Florence and the Machine) and Green’s long term collaborator Alex ‘Cores’ Hayes, and co-written with Kid Harpoon. It features the vocals of Dutch singer-songwriter, rapper and producer Mr Probz – the man behind this year’s global club and chart smash hit, Waves.

The video for Little Secrets is directed by Alex Herron, (Tinie Tempah, Afrojack), who also directed the video for Lullaby (which has now garnered over 5 million views). It was shot in LA and features a compelling narrative centred around the theme of infidelity.

The recently released Growing Up In Public, is set to add another incredible chapter to Green’s all-conquering career which has seen him amass over 500,000 album and 2 million single sales in the UK alone; spawn two Top 3 albums and eight consecutive Top 40 singles; embark on three headline tours in addition to performing on the main stages of countless festivals such as Glastonbury, V Festival and Wireless; and be nominated for a plethora of awards including the Brits ‘Best Male’ over and above earned NME and MOBO awards. Not to mention a high profile underlined by huge social media statistics – 2+ million Facebook Likes, 2+ million Twitter followers – and the fact that his journey has been documented by Channel 4 in a six episode TV series (Professor Green Unseen and Professor Green Unseen: After Hours).

Professor Green’s single Little Secrets (feat. Mr Probz) will be released by Virgin EMI on 7th December. In the run up to release, Green will also be embarking on a nationwide headline UK tour, which kicks off in Glasgow on 28th November and finishes on 11th December in London.