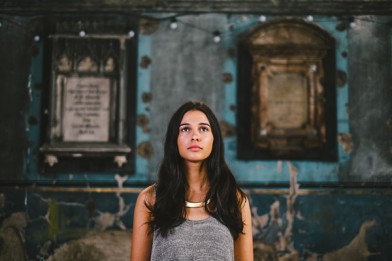 Singer songwriter Naomi Scott, releases Motions on 3rd November, taken from her debut EP Invisible Division. Released in August, the EP features Naomi’s distinctive voice blended against a backdrop of alluring soft, rhythmic ballads and alternative pop tracks.
Motions is an infectious, upbeat, fun yet credible pop track written by the songstress and produced by the dynamic team, known as The Confectionary. With the 80s pop era being an influence, it has an instantly recognisable sound. The video has been shot by director and animator Peter Szewczyk, who has worked on films such as Harry Potter and Shrek.

Since 2011, Peter and Naomi discussed working together on one of her forthcoming music videos. Simple and natural were key standout themes, with Peter finding inspiration from hand cut sculptures and the airy translucency of paper that evoked a sense of wonder, texture and colour. The result is an energetic and animated video that embodies the spirit of the song.

Peter Szewczyk says, “Naomi is one of the most naturally talented people I have ever met. She’s one of these marvels, that is just good at everything. I’ve been trying to work with Naomi since 2011 and I’m excited about the video for Motions and pleased with the results.”

Naomi Scott says “I’m so excited to release my first ever music video! I worked so hard on my ‘Invisible Division’ EP and can’t wait for people to finally see a visual aspect from it. The boys (The Confectionery) and I had so much fun making it.
For the video Peter and I wanted a juxtaposition of a Shoreditch urban warehouse space and quirky nature elements. This would then build a world around me making the song come to life. Having Peter on board was an absolute dream.”
It’s been a busy summer, for the rising star, who has been supporting pop princess Delilah, on her UK #NoFilter tour at Union Chapel in August, as well as performing at #buskinthebox in Shoreditch.

Naomi took her vocal range to the rooftops and performed at Reverb Live at the Kensington Roof Gardens, alongside Kyra, Lexie and Wretch 32 who headlined. Up next is supporting Fifi Rong at Barfly on 29th October.
Next year, Naomi will be returning to the silver screen alongside Antonio Banderas in The 33, based on the true story of the Chilean Miners. Starring Juliette Binoche and directed by Patricia Riggen. Naomi will also be starring in Indy flick Hello Again with Jack Brent Anderson and directed by Tom Ruddock.