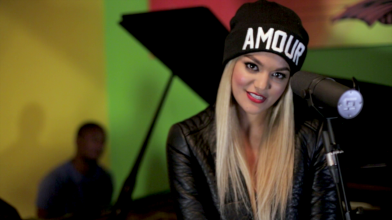 Magalie performs an exclusive acoustic session for Pop Scoop! singing the Kate Bush classic ‘Running Up That Hill’. We are pretty excited about this one, A daring choice and Magalie nails it, just gorgeous!

Magalie has released her debut single, First Kiss, like her style her future is looking bright. Having always had a love for music (inspired from Alanis Morissette to Prince), Magalie’s sheer determination led to various chance encounters with the music industry.

From writing sessions with pop gurus Guy Chambers (Robbie Williams, Adele) and Wayne Hector (One Direction), it was perhaps one chance encounter with Zepherin Saint, label head of legendary dance label Tribe Records, which saw Magalie realise her ambition of starting the pop path. Zepherin, so convinced by Magalie’s raw talent even launched a new division of the label, simply called Ovation. Add to this a brief spell writing in Atlanta via friend and mentor Taio Cruz also, and the result is an artist who has found her self, and her voice.