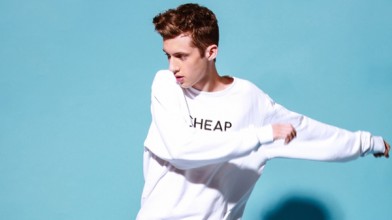 If you’re yet to hear of Troye Sivan, you’ve most likely been living under a rock. Between taking over the radio waves recently, to his YouTube channel with over 2 million subscribers or even his role as young Wolverine in X-Men Origins Wolverine or starring roll in the Spud movies.

Between all this, its no wonder ‘TRXYE’ has topped the charts in over 55 countries worldwide.

Troye’s first five track EP if the perfect blend of electro pop and emotion that easily attracts in a broad audience. The single off the EP ‘Happy Little Pill’ is a very catchy tune, that has been infecting many radio stations worldwide since release and quickly becoming an incredibly popular track worldwide.

Three of the other tracks on the album ‘Touch’, ‘Fun’ and ‘Gasoline’ follow similarly to the first track, keeping with the electro pop and emotional theme, these three are also very catchy and memorable songs. The songs do give a glimpse at a deeper meaning, and allow listeners to make a real emotional connection to the songs.

The final and probably my personal favourite, is ‘The Fault In Our Stars (MMXIV)’, the song is a really emotional song. Written about the book ‘The Fault In Our stars’ by John Green, Troye said at the time of the original release that the book effected him deeply, and this new release of the song adds in much more in the way of sound, but very much keeps the emotion raw.

This EP is definitely a standout debut EP; Make sure to check it out on iTunes Trxye – EP – Troye Sivan and Google play now!