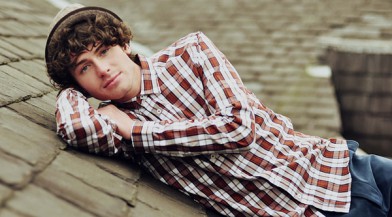 X-factor star James Michael is to releases his new single ‘How does it feel’ on the 15th September 2014. The song is a cover of Slade’s 1974 smash hit. The song represents how much he has learned since his 2011 X-factor appearance, and showcases his natural groove and performance repertoire and Pop Scoop! has an exclusive acoustic cover performed by the man himself.

James is to release his new single ‘How does it feel’ on September 15th. The star of the 2011 series has been spending the last three years honing his song writing skills and playing live. This combination has given him a starting platform to reboot his career.

James has drawn on a variety of influences, and this is one of the reasons he chose to cover a Slade song as his first reboot single. The singer, songwriter, and performer cites a diverse range of influences including Alanis Morrisette, Paolo Nutini, Ed Sheeran , Natalie Merchant, Ray Lamontagne, John Mayer, Stevie Wonder, Whitney Houston, James Morrison, Otis Redding, Stereophonics , Kings of Leon, and The Kooks.

With this fusion of styles it is refreshing that James has put his own spin on ‘How does it feel’. James’ take on the song is a mellow one and it transports you on a journey rather than asking a punchy question and it’s a journey that we can all relate to.

The three year break between James’ surprise exit from the X-factor was time well spent. Taking inspiration from his mentor on the show, Gary Barlow, and his experiences in a recording studio he has come back with his own distinct sound. Paul Ferris, producer of charity event ‘Shine Bright like a Diamond’, said of James: “What a star! Shone bright, bright, bright.”

James has refined his song writing skills and arranges his own tracks. He spent a lot of time gigging at Studio 2 Parr Street in his home town of Liverpool, and The Studio in Widness. This has given James valuable experience at playing live and connecting with audiences. He has stated that he wants to inspire people and take them on an emotional journey. Gary Barlow once said: ‘Amazing voice, totally unique – you’re a recording artist waiting to be recorded’. On September the 15th Gary Barlow’s wish comes true when ‘How does it feel’ drops on September 15th. Pre-order your copy on iTunes. Click here.

And if that wasn’t enough, James performed an amazing cover of Ariana Grande’s Break Free, watch below: