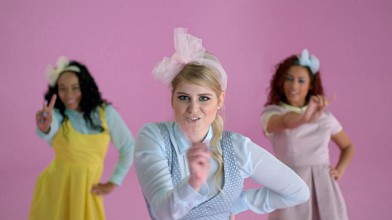 Bouncing like a curvaceous Taylor Swift as she twerks through Katy Perry’s candyfloss wonderland, the video for Meghan Trainor’s debut single ‘All About That Bass’ is a sparkling pop balloon that bursts with unashamed celebration of the big girls.
“I got that boom-boom that all the boys chase/All the right junk in all the right places,” sings 20-year old Trainor as she’s joined by Vine sensation Sione Kelepi in the video that has taken the US by sugar-coated storm. It’s led leading US entertainment bible Parade to declare, “Trainor’s freshman hit is super catchy (seriously, just try not to sing along) and has a tendency to make listeners shake what their mamas gave them and be damn proud of it too.”

Check out the video and shake it like a Polaroid picture.

The contagious pop jive from has already topped the charts at No.1 on US iTunes and broken 12 million views on YouTube since its premiere, and that’s before US Top 40 radio even playlisted the song. The song is also now no.1 on iTunes in Australia and New Zealand and no.2 in Canada and racing up the charts all over Europe. Make no mistake – this is the global hit of the year!

‘All About That Bass’ is an infectiously playful, but intelligently crafted self-empowerment record, which urges females to ignore the standard beauty ideals, set by the mainstream media. Speaking of the song Trainor says, “When writing the song, I was thinking about girls today and how, because of social media, there’s more pressure to be society’s version of perfect and the message of the song is to love your body no matter what.”

The Nashville based singer/songwriter unleashes her bootilicious summer anthem upon the UK through Epic Records on October 5th, while fans can start streaming the monster hit on Spotify from mid-September.