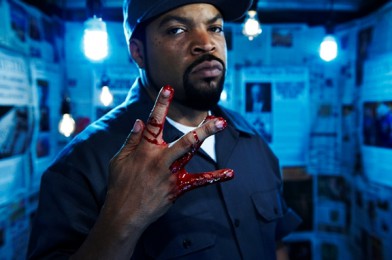 Multi-Platinum and Award Winning Hip-Hop Icon Ice Cube makes his highly anticipated return to the mic with the worldwide video premiere for his debut single, ‘Drop Girl’ featuring Redfoo and 2 Chainz, today on VEVO.com. Directed by Will Kendrick, the fun and contagious video featuring special visual effects is the perfect compliment to the uptempo club banger produced by Multi-Platinum, Grammy nominated producer and featured artist Redfoo.

With the streets buzzing since last year through early online video releases to tease fans for ‘The Big Show,’ ‘Sic Them Youngings on Em,’ ‘Sasquatch,’ along with the visual for the album title track ‘EVERYTHANGS CORRUPT,’ the countdown to Cube’s 10th solo album dropping on October 21st on Lench Mob Records / Caroline officially begins.

As his popularity and record-breaking box office success continues to grow through movies, Cube remains committed to the foundation of his career: hip hop music. Quick to emphasize that he is and always will be a B-Boy, dedicated to writing vivid rhymes, delivering stellar stage performances and making dope hip-hop records, EVERYTHANGS CORRUPT is poised to be another high point in Ice Cube’s mission.

Following the 2010 release of the critically acclaimed, I Am The West, which debuted at #2 on the R&B/Hip Hop US sales chart and in the Top 10 of the Top 200 US sales chart, making it one of the years most successful independent releases in hip hop, the West Coast’s Greatest Rap Lyrist is back again.

‘Drop Girl’ ft. Redfoo and 2Chainz is available now at iTunes and all digital retailers worldwide.