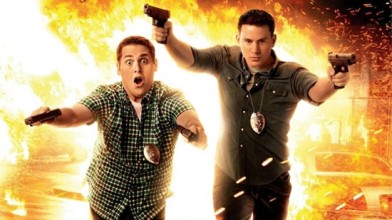 It seems in recent years all we are getting at the movies are sequels and reboots, but is that a bad thing. 21 Jumps Street proved that it was certainly not a bad thing, delivering solid laughs and action throughout. But does 22 Jump Street live up to its predecessor? Does it make a theatre roar with laughter at its self-referential comedy? Does it make you care for two seemingly dull characters? Short answer: yes. Yes it does.

Story
The movie opens with a great action set piece that, much like the first movie, introduces not only the main characters but also the villains. The scene is a solid way to start a movie, as it truly sets the mood for the rest of the film. Sure we are trying to stop drug dealers, but why not have some fun as well. They are sent to college, to stop a new drug that has caused a death. Sound familiar? It should as this is exactly the same plot line as the first movie. “Let’s just do what we did last time”, a phrase repeated throughout the film. This leads me on to the comedy. It is rare for me to laugh so hard at a movie, especially in a packed cinema. This move was nonstop laughter from start to finish, and even the emotional scenes were lasted with hidden innuendos and references. The reveal of Schmidt’s love interest as being the Captain’s (Ice Cube) daughter (“Get this man a drink of water, he’s black he’s been through a lot” Schmidt says, trying to win the captains trust). Jenko (Channing Tatum) asking Schmidt (Jonah Hill) if he thinks next year they will be across the street in 23 Jump Street, which is currently a building site that says coming soon. The captain saying the new building is a cube of ice. The list is endless. This movie is fast becoming one of the all-time greats of comedy. It even tops it off with intense action sequences, in particular the final showdown that occurs on spring break, in the midst of a busy hotel and beach. The fight between the main antagonist and Schmidt was a personal highlight, being one of the funniest and sexually tense confrontation I have ever seen.

Cast
Jonah Hill and Channing Tatum both reprise their roles as Schmidt and Jenko, and provide great on screen chemistry. Alone, these characters are generic and boring, however is the interactions between them and the supporting cast is where the movie shines. Every cast member is handpicked and perfect for the role. From Mexican Wolverine to Mercedes, each character was masterfully written, each given his/her moment to create comedy gold.

Credits
A quick shout out for the credits. As the credits began I was preparing to stand, but was met with a pleasant surprise. For another ten minutes, the movie continued, showing all possible sequels including, medical school, ninja school and dance academy. Here’s to the wack ones as well, such as the animated series or videogame. When they trained to be priests it is joked that Jonah Hill and contract issues and pulled out, so we see Seth Rogan make a cameo as Schmidt, only to return for the next movie. Jump Street 2121. A man can dream.

Verdict
“Nobody cared about the Jump Street reboot” exclaims Deputy Chief Hardy, and it’s true. Reboots are historically destined to fail. The fact this one succeeded is a testament to the performance of Hill and Tatum and to the writer for writing an instant classic. I will keep this review short and sweet, and urge you to go see this movie. Constantly breaking the fourth wall, delivering unforgettable moments and a satisfying story, 22 Jump Street exceeds its predecessor. I would rate this movie 9/10