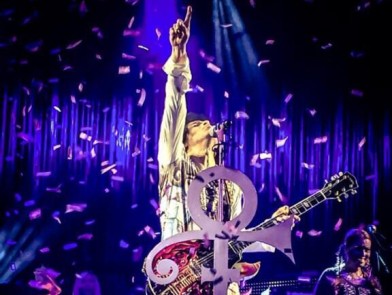 The enigmatic icon arrived from America just yesterday and was escorted from the airport straight to the arena for a brief soundcheck and last-minute rehearsal. Forty minutes later than the scheduled concert start time Prince holding a huge bunch of purple and cream balloons released them to the roof as the band launched into 2014’s ‘FUNKNROLL’. A turbo charged medley ensued with ‘Take Me With U’, ‘Raspberry Beret’, ‘Kiss’ and ‘Lets Go Crazy’ before Prince declared ‘soundcheck over!’ and the band moved into brand new material including a riotous version of the title track of the highly anticipated forthcoming 3RDEYEGIRL album ‘PLECTRUMELECTRUM’ which is set for release this year. Lead track from the album ‘PRETZELBODYLOGIC’ was performed fully live for the first time.

Running for nearly two and a half hours the set was a masterclass in the very best of Prince – incredible singing, electrifying guitar playing, breathtaking showmanship and some seriously funky moves! As well as leading the band Prince also took things down a notch with an evocative solo piano set which included ‘How Come You Don’t Call Me Anymore?’ and ‘Diamonds and Pearls’, before bringing the band back for a selection of catalogue classics including ‘Controversy’, ‘1999’ and ‘Little Red Corvette’. After mixing it up with more hits the night closed with ‘Purple Rain’ and a curfew-defying version of ‘Play That Funky Music’.

The ‘Hit and Run Tour – Part II’ follows on from Part I which saw Prince & 3RDEYEGIRL take over special and intimate venues in London and Manchester this February for a series of history making spontaneous shows announced at the 11th hour via Twitter. Legendary venues included Ronnie Scotts, Electric Ballroom and Shepherds Bush Empire, with the band often playing up to three shows in one night. The Guardian said it best, describing the Electric Ballroom shows in this way: “These are performances by one of the greatest funk-rock bands ever.” The group has been showered in 5-star reviews from all major reviewing media.

Now with ‘Hit and Run – Part II’ these exclusive arena shows in Birmingham, Manchester, Glasgow and Leeds are his first since Prince’s sold out residency at The O2 London in 2007. This will be the first time Prince has ever performed in Leeds and is also the first time he has headlined a show in Birmingham and Glasgow in 19 years. His Manchester show follows two nights at the Academy in February.