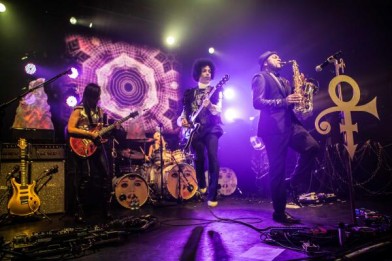 Prince & 3RDEYEGIRL took their ‘Hit and Run’ tour out of London for the first time last night when they took over the Manchester Academy, Friday February 21st 2014.

On a wet and cold night Prince and the band turned the Academy into a furnace, creating a steamy atmosphere that started with a fifteen minute version of ‘Funk N Roll’, complete with lucky members of the crowd being pulled on stage to dance, and ran through without let up until the show finished after its fourth encore two and a half hours later! One fan put it bluntly: “I think Prince got Manchester pregnant tonight!”

Underlining that no two performances on the ‘Hit and Run’ tour have been the same, Prince and the band changed gears again from their midweek fusion jazz set at the legendary Ronnie Scotts to send the Manchester audience wild with an explosive set of heavy rock and funk that included brand new tracks from the forthcoming 3RDEYEGIRL album ‘PLECTRUMELECTRUM’. 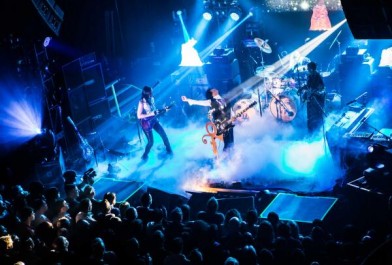 During the set the band performed a mix of catalogue classics and surprises that included ‘She’s Always In My Hair’, ‘A Love Bizarre’ and ‘I Could Never Take The Place of Your Man’. Moving effortlessly from guitar to bass to keys, Prince threw down magical versions of rarely performed songs including ‘Sign of the Times’ and a full-length ‘When Doves Cry’ before encoring with a spine-chilling rendition of ‘Purple Rain’. Many in audience were overcome by tears. Reviewing the show with 5-stars, Manchester Evening News had this to say:

“Although he likes to shake things up and experiment with different genres, Prince has always championed the fact he performs ‘real music by real musicians’. His latest bandmates come in the shape of his high-heeled, glamorous all-girl group 3RDEYEGIRL – consisting of Hannah Ford on drums, Ida Nielsen on bass and Donna Grantis on guitar – and show that view clearly hasn’t changed. They play so tightly you’d think they have been performing with Prince all his career, but he and his virtuoso girl group have been a unit such a short time. Long may they and the Purple One reign.”

The show was the latest in Prince and 3RDEYEGIRL’s spontaneous ‘Hit and Run’ tour following history making performances at the Electric Ballroom, Shepherds Bush Empire, Kings Place, Koko and Ronnie Scotts. The group has been showered in 5-star reviews from all major reviewing media.

The ‘Hit and Run’ Tour continues tonight, Saturday 22nd February with a further show at the Manchester Academy.