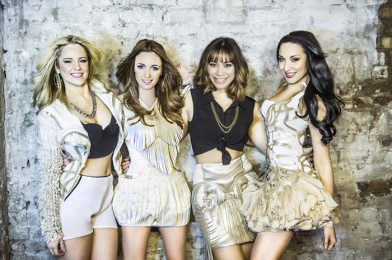 With their forthcoming new single ‘Damn’ soaring up the Music Week Club Charts, Vanquish have treated fans to another outstanding acoustic cover. This time it’s the brand new single from Kylie Minogue that gets a Vanquish makeover.Lucy said of the choice “Kylie is the ultimate popstar and we fell instantly in love with ‘Into The Blue’ as soon as we heard it. It’s such an uplifting song which is what you need with all this endless rain!”

The girls showcase their fantastic live vocals and hypnotizing harmonies that have earnt them over 1 million youtube views and seen them rework songs from Katy Perry to Keane, James Arthur to Miley Cyrus.

Vanquish will release their new single ‘Damn’ on 23rd March, a slice of infectious pop with attitude and boundless energy – much like the girls themselves! These four 18 to 21 year olds are ready to put the fun into pop with dynamic performances and a song that packs a punch.

Since July the girls have been performing to crowds of thousands across the UK, supporting acts such as Amelia Lily, Loveable Rogues and Blue and performing at numerous large-scale Pride, Bonfire Night and Christmas Light Switch-On events. This Spring sees them on tour with boyband M.A.D. Here’s where you can catch them live: